The Journey of Land Ownership

A step-by-step look at the process of purchasing land that our citizens go through, starting with verifying the land's title all the way to registering the sale deed to making it secure from potential disputes in the future. 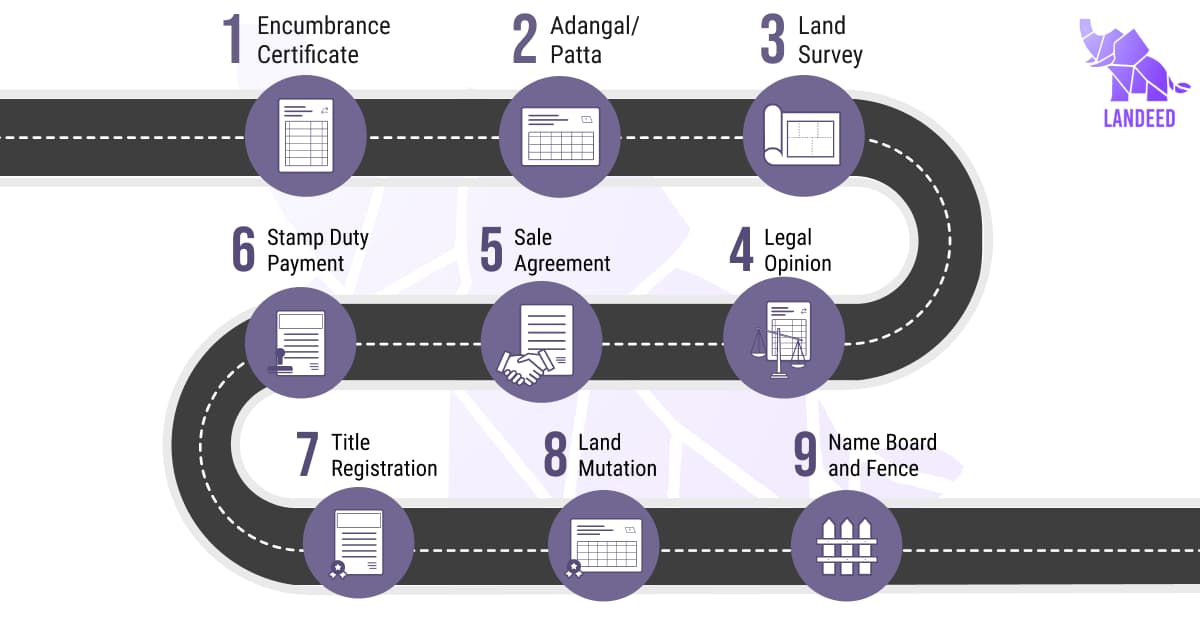 Last year, Parth decided to buy a land in Chennai. After a long search, he finally zeroed in on a property he liked and was relieved to finally be close to confirming the purchase. However, he soon realised that the real work was yet to come. The more he learned, the more questions he had. What were the steps to buy the land? What legal documents were needed to transfer property ownership? What should he check before going through with it?

After hearing horror stories of never-ending land disputes and court cases, Parth's first step was to make sure that the person who was offering to sell him the land was the actual owner of the property. So, he applied for the Encumbrance Certificate (EC) at the sub-registrar office (SRO) and was told to collect it the next day. He ended up getting it after 4 days but he was glad to see that the person he was dealing with did own the land (according to the Registrations Department) and that there were no mortgages pending on it.

Next, he visited the Mandal Revenue Office (MRO) to check the revenue documents. After receiving the adangal, he confirmed that the owner name and property area were the same as the EC. He also verified that the property tax was cleared till date and the name on the receipts was the same as the adangal and EC.

Parth then hired a private surveyor to confirm that the extent and measurements exactly matched the documents. He checked the zoning regulations of the land since he planned to build over it. He also learned that he would be able to build a larger area if he built a commercial building there since the land was in a zone where the government was trying to incentivise businesses to move in.

Parth's final step in due diligence for verifying ownership for getting a Legal Opinion from a lawyer. The lawyer looked all the previous registered deeds on the land and link documents, matched them with the EC and deciphered the flow of title. He then ascertained that the flow was unbroken and there were no potential disputes that could be brought up at a later time. He also checked for any pending court cases on the land. The lawyer gave him the legal opinion in 15 days, stating that the title of the land was clean and marketable (with a side note that it was only based on the documents the lawyer was provided and that the lawyer himself had no legal liability if the assessment was wrong).

Once Parth was satisfied that the land title was clear, he then had to make sure the price was reasonable. He spoke with a few real estate agents in the area to guage the prevalent rates. Upon their suggestion, he also spoke the owner to check for proper road access.

Once both Parth and the current land owner were satisfied with the rate, they had a sale agreement drafted by an attorney. According to the agreement, Parth was to pay 10% of the land value as advance. The remaining payment would be made before registration of the change in ownership. The registration of the sale deed, transferring ownership of the land to Parth, would also be completed within the same duration. The details of the land and the rate agreed upon was included in the agreement.

The next stop for Parth was to finally get the sale of the land registered with the government, starting with the payment of stamp duty and registration charges. He got checked the rate applicable to him and bought the e-stamp papers online. He hired an attorney to draft a title deed including all the important information about the property and the parties involved. It had to be signed by him, the current land owner and two witnesses. He then submitted the signed deed at the sub-registrar office with ID proofs, property documents and proof of payment of stamp duty and registration fees. The registered document was scanned and uploaded on the portal by the SR office after registration was complete.

Once the registration was complete, Parth was considered the legal owner for the land. However, he still had to apply for mutation, the process of transferring of title ownership name in records of the revenue department for a property. This was done so that revenue documents (like adangal and patta) and property tax related documents would be in his name, solidifying his claim on the property. This process was completed at the mandal revenue office.

Done with the official requirements to legitimise his purchase, he had a board built stating his ownership of the property and had a barbed wire fence installed all around, with a strong gate, to  protect the land against any encroachment.

After more than 2 months, Parth was glad to have successfully navigated through the intricate system of land transactions in the country but he was left wondering if there was a faster and easier way.

Complete the process of buying land quicker and safer. Landeed is here to help. Check property documents and get a legal opinion before your purchase to protect your investment. Download the app now.

Join us on Telegram to meet with other real estate owners, investors and enthusiasts